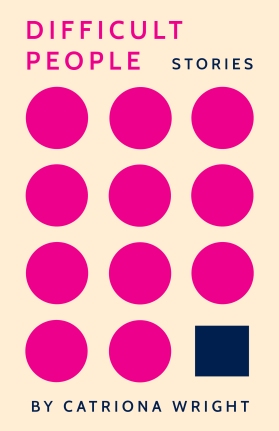 Manipulators, liars, egomaniacs, bullies, interrupters, condescenders, ice queens, backstabbers, hypocrites, withholders, belligerents, self-deceivers, whiners, know-it-alls, nitpickers: these are some of the characters you’ll encounter in Difficult People. As these characters fumble through their quests for freediving fame, stand-up glory, romantic love, stable employment or anyone who can tolerate them, they reveal that we are all, in our own ways, difficult people.

Shortlisted for the 2019 ReLit Award for Short Fiction

“Deft, dark and unflinching, Catriona Wright’s work is stand-up comedy for the mind.”
– Emily Schultz, author of The Blondes

“Difficult People is a tour de force — there isn’t a single flaw in this airtight collection populated by a modern cast of misfit characters.” – Patricia Dawn Robertson, Winnipeg Free Press

“These are stories that are singular, and Wright has such an eye for detail, a knack for character and nailing a particular point of view, and for rendering the ordinary as strange and baffling as it actually is.” – Kerry Clare, Pickle Me This

“…with their mixture of offbeat personalities, horrid situations and entertaining writing, Difficult People contains some of the most engaging new stories I’ve read for quite some time.” – Eric McMillan, Streeter.ca

“…Wright problematizes her collection’s title: which of the characters, we are forced to ask, are meant to be the difficult people? At her best, here and throughout the book, Wright dramatizes the shifting nature of this appellation. The twelve stories are united by their implication that, depending upon the particular circumstances, everyone has the capacity to be a difficult person.” – Steven Beattie, The Humber Literary Review

“The title story highlights what each selection confirms. Wright’s characters don’t seem so difficult after all, especially for fiction. While they may make mistakes, the things they strive for are mostly common–work, friendship, love, correct grammar on public signage, success in open-mic stand-up comedy, the experience of motherhood. Readers may find themselves questioning whether it’s really the people who are difficult or, instead, the world around them.” – Katy Hershberger, Shelf Awareness